In the run up to Halloween 2011, we decided to hold a vote on which film would be shown, in view of certain members’ fears of scary films!  We all nominated 2 films and the winning film was revealed on the night.  It was ‘Rosemary’s Baby’, and it went a little something like this….

MNFC’s first Halloween De-mon-ocracy went off without a hitch, with the fascists outdoing themselves on the culinary front. We had hot and cold salads, sausage casserole, spinach and cheese parcels, pasta bake and cheese, as well as the usual array of condiments we have come to expect from Jess, and that was just the first course! Jess made a sublime pumpkin cheesecake with the insides or a very fine jack o’ lantern, Matt got all Yorkshire on us with parkin, and I channelled the spirit of Nigella with a devil’s food cake to round off the evening’s gluttony. If enough people are interested, I can collect up the recipes and send them out.

Comrade Love revealed the results of the vote, and displayed them in helpful chart form. I have also created a chart to show how everyone voted. I was tempted to get even geekier with stats and other types of chart but decided that it was in everyone’s interests that the true extent of my love for Excel should remain hidden.

Anyway, down to the film. The winner was Rosemary’s Baby, put forward by me (obedience to the founder is alive and well in MNFC), narrowly pipping The Wicker Man to the post. It was directed in 1968 by Roman Polanski, and starred a very young and waif-like Mia Farrow as a young woman who moves into a new apartment building with her husband, Guy. They are befriended by their neighbours the Castevets, who personify the ‘nosy neighbour’ stereotype and then some! When Rosemary becomes pregnant, the interest of the neighbours grows and an increasing number of strange things start to happen in the apartment building. Rosemary starts to fear for her unborn child, and we are made to wonder if everything is in her head or if something really is going on. The film comes to a very surprising conclusion, and the final few minutes of the film are perhaps the most disturbing. 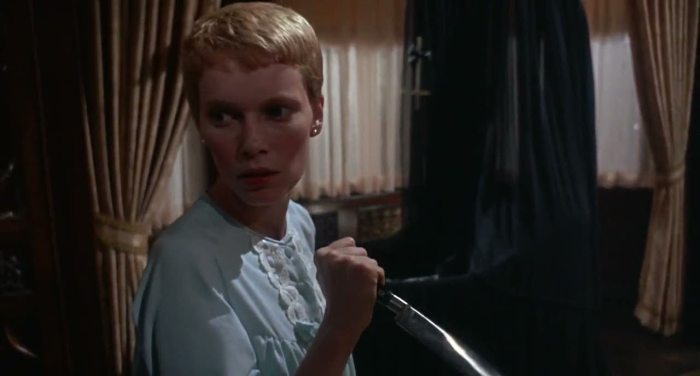 Rosemary’s Baby is often featured on lists of the scariest films ever made, so everyone was a bit apprehensive as we sat down to watch it. As it turned out, there were some very funny, even slapstick moments, but these somehow enhanced the disturbing nature of the film. The funniest and scariest character in the film had to be the neightbour Minnie Castevet, as played by Ruth Gordon, who deservedly won a Best Supporting Actress for her performance.

There is a lot of interesting trivia around the film, including such notable facts as these:

* Mia Farrow was served with divorce papers on the set of the film by her then husband, Frank Sinatra
* The New York building used as the location of Rosemary and Guy’s apartment is the Dakota building, which became notorious a decade later as the home of John Lennon, as well as being the location of his murder
* Mia Farrow actually ate raw liver in a scene for the movie
* The voice of the actor that Rosemary speaks to on the phone in one particular scene was provided by Tony Curtis
* Charles Grodin, who plays Dr Hill, went on to star in the Beethoven movies

Slightly less trivially, the film has become inextricably linked to the tragic and brutal murder of Polanski’s then wife, Sharon Tate, a year later. Tate, who was 8 months pregnant at the time, was stabbed multiple times along with 4 of her friends by members of Charles Manson‘s ‘family’ of followers, who also daubed the word ‘pig’ across the door of the house in Tate’s blood. Polanski was in Europe at the time.

Polanski himself has been dogged by controversy, having to flee the USA in the late ’70s on being convicted of the statutory rape of a 13 year old girl. He has lived mostly in France ever since, as French law prevents his extradition to the States.

Mia Farrow went on to marry Woody Allen, have 15 children – mostly adopted (Angelina is such a copy cat!), campaign on humanitarian issues in Africa and more particularly in Darfur, as well as working as a UNICEF Goodwill Ambassador.

Rosemary’s Baby has become a cult classic, so it was hard to select which of the delights the interweb offered up to share with you. However, for those of you who would like to find out more I have gone for a Christian take on it from ‘Hollywood Jesus‘ and the conspiracy theorist view. The latter is almost as scary as the film; on the surface it seems quite an intelligent, considered critique but is actually bonkers. The tag line for the website is “Symbols rule the world, not words nor laws”!