14.5.12.  Well, comrades, what an evening! This MNFC was like a Hollywood blockbuster – it had it all! Sex, special guest stars, awesome one-liners – all that was missing was an action hero walking away in slow motion from an explosion, though I’m sure Lucy and her housemates were pleased about that.

The sex came courtesy of Lucy’s film choice, Secretary, which tells the story of emotionally damaged young woman, Lee Holloway, and the development of her relationship with her equally anguished boss, E. Edward Grey, into something not altogether conventional. 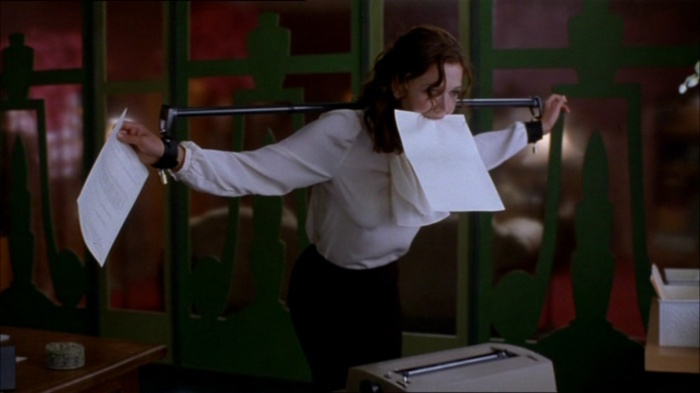 After weeks of breathless anticipation, we were prevented from feeling too disappointed to find that the special guest star was not an ageing disco star by the fact that it was the much more exciting Dave the Bear (who incidentally has an entry on IMDB, a Facebook profile, and a cabaret night. Not sure it’s the same Dave though)!

The awesome one-liners were too numerous to remember, but were mostly inspired by the sex and the risqué nature of the relationship between Lee and Mr Grey so you can probably come up with some of your own in your own time.

Maggie Gyllenhaal played Lee Holloway with sensitivity and a sweetness that seemed to allow the BDSM elements of her and Mr Grey’s relationship to seem more than just a bit kinky or sordid. I think she did a much better job than Gwyneth Paltrow would have, and believe it or not she was originally cast in the part! She was well-matched by James Spader as Edward Grey, who managed to portray so much of his character and feeling through actions and intent looks alone. Spader is well know for playing sexually twisted or dysfunctional characters on film, most notably in Sex, Lies and Videotape and Crash.

The chin-stroking portion of the evening was extremely lively, with Comrade Love fighting his corner against the rest of the group, although MNFC virgin Dave jumped from one side of the fence to the other with admirable skill over the course of the discussion.

There were a number of thorny issues:

We agreed to disagree, with some of the fascists viewing this film as a kind of modern fairy tale and others remaining disturbed by it. These attitudes were mirrored by the Guardian and BBC respectively, with both making some interesting points about the message of the film and the nature of the central relationship.

I also found some particularly interesting comments about the film on a website for people of a dominant/submissive tendency which you might want to peruse at your leisure. Probably not wise to do it at work though.

On a more harmonious note, the film was agreed to be very stylish, with use of bold colours reminiscent of Almodóvar. The music was at times quirky, but always atmospheric. The score was composed by Angelo Badalamenti, who is best known for his collaborations with David Lynch – very appropriate, I’m sure you’ll agree.

So, dear fascists, only 2 weeks to wait until the next instalment – huzzah, I hear you cry! Comrade Richards will send out instructions in good time. I will end by saying how pleased I was by your tribute at the weekend. I will endeavour to choose a suitably exciting film for our viewing pleasure!

I’D RATHER BE A FASCIST THAN A WANKER