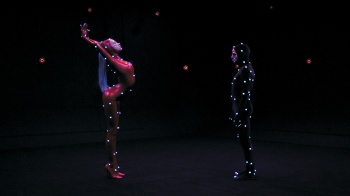 “The director has said it all started by being fascinated by limousines from weddings. They contradict themselves; “They say, ‘Look at me but don’t see me.’” He saw them as a symbol of the virtual world (much like our internet world), they want to be seen but won’t let you see in…” Indie

“From dawn to dusk, a few hours in the life of Monsieur Oscar… He seems to be playing roles, plunging headlong into each part – but where are the cameras? … like a conscientious assassin moving from hit to hit. In pursuit of the beautiful gesture, the mysterious driving force, the women and the ghosts of past lives. But where is his true home, his family, his rest?” Red Fruit

“BEAUTY IS IN THE EYE OF THE BEHOLDER. BUT WHAT IF THERE IS NO BEHOLDER?”

“ it could be a statement on the movie industry and the lunacy of the acting profession…a philosophical take on life and the different roles we all have to play… man’s uneasy, shifting relationship with technology. Ultimately… when you’ve got Kylie as an air stewardess, belting out a song by The Divine Comedy’s Neil Hannon in an empty department store, does meaning even matter?” Realm

“Searching for meaning is an almost-futile exercise…If Carax is attempting to embody ‘cinema’, is he concerned by how the advances in technology has affected spectatorship and what viewers desire?… Oz

“The film is therefore a form of science fiction, in which humans, beasts and machines are on the verge of extinction – “sacred motors” linked together by a common fate and solidarity, slaves to an increasingly virtual world, a world from which visible machines, real experiences and actions are gradually disappearing.” Carax

“FOR THE BEAUTY OF THE GESTURE.”

“Monsieur Merde is fear and phobia. Childhood too. He’s the great post-9/11 regression (terrorists who believe in tales of virgins in paradise, political leaders rejoicing that they can finally make the most of their full powers, like all-powerful kids. And dumbfounded people, like orphans in the dark). Monsieur Merde is the extreme foreigner: the racist immigrant.” Carax

“…classic cinema not as fodder for citation or imitation but as communal dream material…a film about life as cinema and cinema as life.” Cinema

“From the opening sequence featuring Etienne-Jules Marey’s pre-cinematic experiments deconstructing the movements of a walking man) to the finale in which the actress Edith Scob is…made to wear a mask referencing her part in Georges Franju’s Eyes without a Face (1960), Carax’s film is a cornucopia of references… Citations range from canonical art cinema (Franju, Demy, Cocteau, Buñuel) to Hollywood blockbusters such as Cars and Godzilla.

…[Oscar’s] incarnations are better understood as parables of dying and resurrection or meditations on artifice and authenticity than as offering a coherent message or narrative.” Institute