It all started with guys and gals from the 1970s strutting their polyester-clad stuff on the dance floor, platform heels spinning, fingers pointing first to the sky and then to the floor as if summoning an errant cat down from a tree. Several decades later, it is the province of embarrassing older male relatives who’ve had too much to drink at family functions, or drunken students in afro wigs at theme parties. 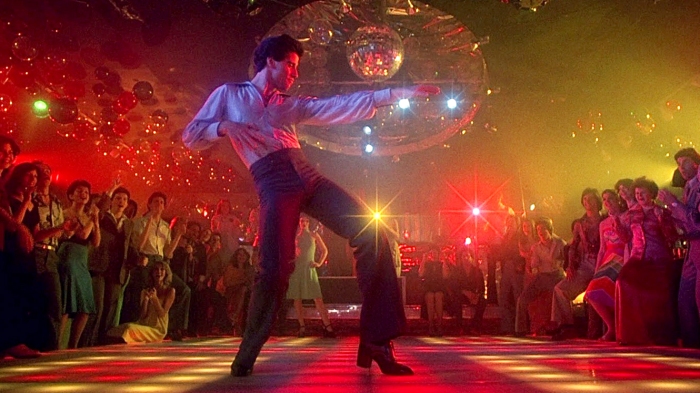 But John Badham’s classic Saturday Night Fever, the film that catapulted John Travolta to super-stardom and cemented the Bee Gees’ place in pop music history, paints an altogether more sinister picture of the lives of the young people who embraced disco. Domestic violence, rape, unwanted pregnancy and gang fights are just some of the troubles Tony Manero (Travolta) and Stephanie (Karen Lynn Gorney) are trying to escape from. In fact, the subject matter of the film was so serious that it was initially given an R rating the States for its release in 1977, but the following year an edited, PG-rated version was released, apparently in an attempt to capitalise on the success of the soundtrack with young people.

Although we couldn’t help but laugh at the scenes featuring dance moves that have been parodied a thousand times, the dark mood of the rest of the film left a lot of the film fascists feeling uncomfortable.

The position of the film’s women was particularly hard to accept, as apparently their only choice was between being nice girls or tramps, but either way suffering under the weight of widespread misogyny and male posturing. It is quite interesting to read the two reviews of the film by legendary film critic Roger Ebert in this respect, one written at the time of the film’s release and the other twenty years later. The first review touches only briefly on the situation of women in the film, whereas the second sees ‘the difficulty that some men have in relating to women’ as one of the central themes of the film and pays much more attention to the female characters and their stories.

The film was based on a New York magazine article written by British music journalist Nik Cohn in June 1976, entitled ‘Tribal Rites of the New Saturday Night’. Although Cohn insisted at the time that the story was completely true, he admitted twenty years later to having made it up. True or false, it’s a wonderful piece of writing.

The film spawned a sequel, Staying Alive, written and directed by none other than Sylvester Stallone, which also starred Travolta but did not repeat the box office success of the original. I also came across this 2008 film from Chile, Tony Manero, about a serial killer obsessed with the character from Saturday Night Fever.

The film would not be the same without the now iconic music provided by the Bee Gees. The soundtrack won the Album of the Year Grammy in 1978 and sold over 30 million copies worldwide. The film’s producer Robert Stigwood would say later that he thought of the Bee Gees as co-creators of the film.

The famous poster for the film features Tony strutting in his legendary white suit and Stephanie gazing up at him wearing a bright red dress. However, the eagle-eyed among you will have notice that the dress Stephanie wears for the dance competition is, in fact, white. I couldn’t find an explanation for this, but some dedicated googling did find this site examining the meaning behind the costume choices in the film.

And so to the dancing. The general consensus was Travolta = good, Gorney = bad. The more professional dancers among us felt that Gorney was awkward and unconvincing next to the dazzling moves of Travolta. If only Comrade Lisa had been alive then to give her lessons. Yes folks, we have a genuine disco dance instructor in our midst! It got me thinking that this year’s FAFTAs should have an ‘MNFC’s Got Talent’ theme…

If we are unable to convince Lisa to show us some moves, there is always this lovely lady on YouTube to help you bring out your inner Tony Manero. You might also be inspired by these charming folks from a retirement home in New Zealand, who prove that you’re never too old to disco (I recommend also watching the video of another group of Kiwi pensioners strutting their stuff to the ubiquitous ‘Happy’ further down the page. Geriatric Pharrell and his pals have the edge on geriatric Tony and gang in the cool stakes).

So, coming full circle back to my original point, I leave you with one of the best-loved parodies of the dance sequence from Saturday Night Fever, and this vintage gem of Gill and Janine winning a TV dance competition in the most splendid matching sequinned outfits I have ever seen. I don’t know who Gill and Janine are, but I like ‘em.

THESE GUYS CAN’T DO NOTHIN’ WITHOUT MNFC