It was time for our annual Demonocracy, and for Comrade Di to have her most tense night of the year: would The Orphanage finally be selected?

Yes, that’s right – Halloween is the one time of year that this mighty club introduces some democracy. And, sadly, once again The Orphanage was defeated.

We are a group of filmies who are are generally not ‘lovers’ of the horror genre (with a few exceptions ;-)), so we were all somewhat surprised that the notoriously tricky Eraserhead was chosen.  This was selected by me as a classic, but atypical, horror film that I had not seen – and it turns out the voting followed a similar thought process. 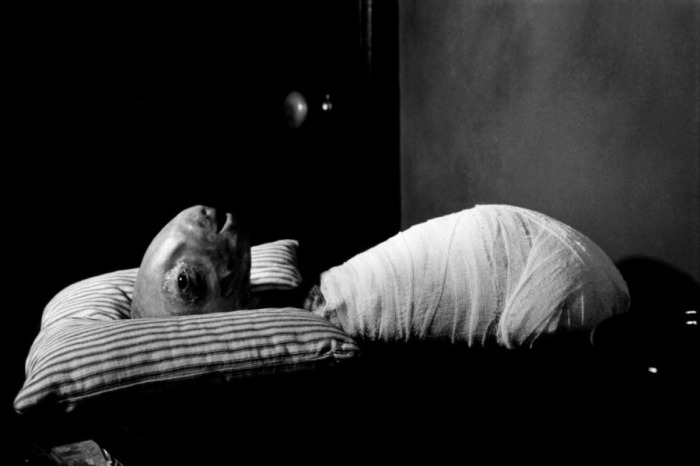 Whilst we were all familiar with Mr Lynch’s work to some degree, the level of surrealism was definitely more than we expected.  As it was his first feature film, it is clear that his films have become more commercial/accessible over the years.

The story ostensibly follows a normal man, Spencer, who has a new girlfriend, Mary. They have a child together, and the film follows the troubles they have adjusting to parenthood – so far, so normal. However, this is not presented quite so plainly. For example, Spencer goes to dinner with his future in-laws. He is asked to carve the chicken. The chicken starts moving and gushing with glutinous liquid. It is repulsive. The baby? The baby is a lizard-dinosaur like creature, that the group initially felt cute, until it develops monstrous sores.

The film is a visceral, horrifying and affecting experience. It is easy to understand why it did not do well on release, but has gained cult status over the years. Lynch rarely offers insights into his films:

“I know you don’t like to speculate publicly about what Eraserhead means, but why do you think it still resonates for people today, after all these years?”

“Well, you know, it’s difficult to say. I always say the same thing: Every viewer is different. People go into a world and they have an experience, and they bring so much of what makes them react, it’s already inside of them. Each viewer gets a different thing from every film. So there are some people where Eraserhead speaks to them, and others it doesn’t speak to them at all. It’s just the way it goes.”

Some of that speculation is that the film mirrors his experiences of fatherhood. This made us feel somewhat sorry for his daughter. Generally, it seems to cover themes of parenthood, responsibility, sexuality and meditation (and indeed Lynch took up transcendental meditation during this film). For an alternative theory on the film, see this interesting essay: Henry’s Window Is The Key To David Lynch’s Eraserhead

The group were surprised that this film got made, given the challenging nature of it. We were therefore surprised to see that the very Sissy Spacek helped fund it – as Lynch was a childhood friend of her husband’s. There also seems to be a misunderstanding from the studio:

“Initial casting for the film began in 1971, and Jack Nance was quickly selected for the lead role. However, the staff at the AFI had underestimated the project’s scale—they had initially green-lit Eraserhead after viewing a twenty-one page screenplay, assuming that the film industry’s usual ratio of one minute of film per scripted page would reduce the film to approximately twenty minutes. This misunderstanding, coupled with Lynch’s own meticulous direction, caused the film to remain in production for a number of years.  In an extreme example of this laboured schedule, one scene in the film begins with Nance’s character opening a door—a full year passed before he was filmed entering the room. Nance, however, was dedicated to producing the film and retained the unorthodox hairstyle his character sported for the entirety of its gestation.”

Whilst this is not an easy film to watch, with genuinely grotesque imagery that stays with you long after the film, it is ‘fascinating’ to see the start of Lynch’s journey. And the film has been so impactful, it has been preserved in the US National Film Registry as “culturally, historically, or aesthetically significant”.

And if that still doesn’t grab you – then Mr Lynch is great value on Twitter: @DAVID_LYNCH

VARIETY IS THE SPICE OF FASCISM