Cast your way back to early February, dear film fans… do you remember the dark nights and the cold rainy skies?  Well, it wasn’t like that for MNFC: thanks to Comrade Sam we were transported to California, to sunshine and surfing, via the brilliant Love and Mercy. 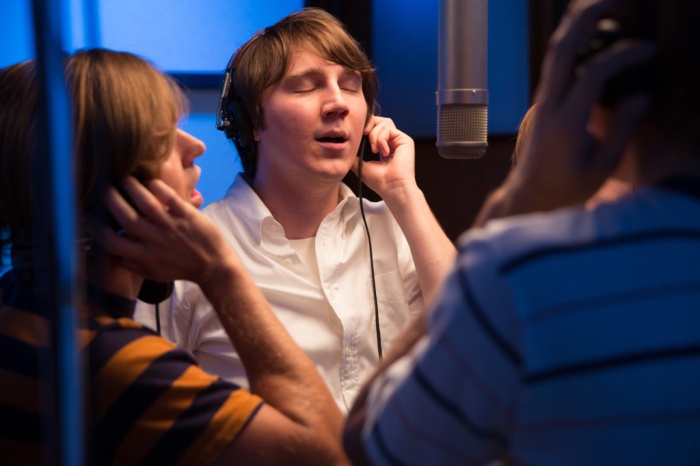 Love and Mercy is another visit to the biopic genre for MNFC, and follows the life of Brian Wilson and the Beach Boys.  As is true for the other biopics we have seen, such as La Vie en Rose and Sex & Drugs & Rock & Roll, Love and Mercy does interesting things with the story-telling narrative.  In this case, we see Brian Wilson in two different times in his life, and being portrayed by two different actors.  For his younger self, we see the brilliant Paul Dano (who in my eyes can do no wrong), composing songs the songs that we all know and love, but falling foul of the temptations of the hedonistic lifestyle that becomes available to him.  Mixed with this, we see John Cusack, struggling with the aftermath of drug use and mental illness.

This narrative device is incredibly effective.  Despite how well things are going for Dano-Wilson, we know from having seen Cusack-Wilson where things are ultimately heading.  This adds an underlying element of anxiety to the film, apparent even to viewers who are unfamiliar with the life of Brian Wilson. 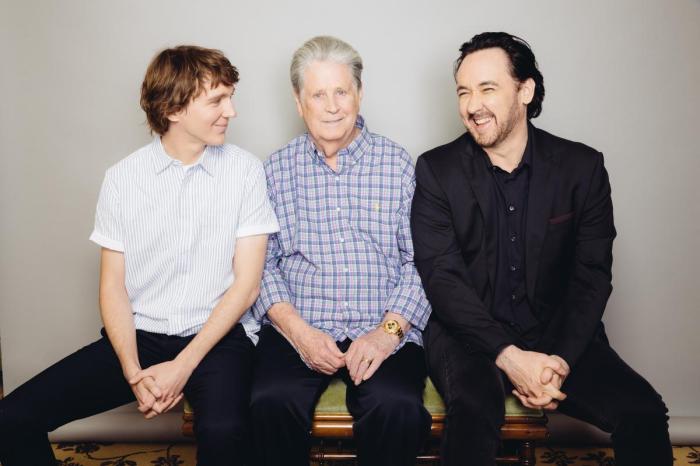 Paul Dano, Brian Wilson, and John Cusack pose for a portrait during press day for “Love & Mercy” at The Four Seasons on Tuesday, June 2, 2015 in Los Angeles. (Photo by Casey Curry/Invision/AP)

It was in the 1960s that Brian, together with his two brothers Dennis and Carl, their cousin Mike Love (no relation to me!) and friend Al Jardine, formed one of the most influential of all American pop bands, the Beach Boys.  It may have been Dennis who suggested that they sing about the newest Californian craze, surfing; but it was Brian who created their distinctive sound, dominated by a complex blend of vocals.  The stress of their fame, however, led Brian to feel that he could no longer tour with the band, although he continued to write and produce all their records.  Then in 1966 he began work on what many consider to be one of the greatest pop albums of all time, Pet Sounds.  Brian, however, continued to become more and more troubled, and eventually all but retired from the world.

I was lucky enough to see Brian Wilson at Glastonbury in 2005.  I have very fond memories of this gig, with the sun shining, and people literally crowd-surfing!  I also remember reading a review in the Guardian (although I cannot find this currently online), and the quote “Brian Wilson had the bemused expression throughout, of a man thinking ‘how did all these people get into my bathroom'”.  This seems incredibly unfair, knowing now the extend of Brian’s mental health problems, and the efforts he has put into recovery.

All of this being somewhat hampered by one of the film’s villains, his psychiatrist Dr Eugene Landy.  A criticism of Love and Mercy is that it does tend to divide its supporting characters into heroes (such as Melinda, played by Elizabeth Banks) and villains (including his father Murry played by Bill Camp).  However, on reading around these characters, such portrayals are not without historical accuracy.  Seeing Dr Landy in this clip is very troubling, as is this Diane Sawyer interview; particularly with the view of hindsight we now have.  There are some interesting insights into his father too, with this letter ‘All I tried to do was make you all honest men‘.

You can see from other Tuesday Reviews, how I am interested in portrayals of mental illness in cinema.  I think Love and Mercy does this very well, it creates a sympathetic portrayal of a tortured genius, and tends to avoid cliche.  In particular, it was interesting to see the use of backwards music, and other sounds such as the cacophony of forks scratching on dinner plates, as a way of demonstrating a psychiatric unravelling and moments of stress or terror.

With all this in mind, I’ll leave you with the ultimate legacy of the Beach Boys.  Voted number one in Mojo Top 100 Records of All Time chart in 1997, and costing the most money to produce of any music single, Good Vibrations.