A great night in Barnes hosted by Comrade Lisa, where we launched the new FAFTA year for MNFC.  And such a fun night and powerful film deserves a quality Tuesday Review, superbly brought to you by Comrade Oli today:

When a film has 100% rating on Rotten Tomatoes, you feel like you’re in pretty safe hands but then again, so does ‘Futurama: Bender’s Big Score’, the documentary ‘A Brony Tale’ (that’s bros who also happen to be My Little Pony super-fans, for those wondering) and the incredibly racist ‘The Birth of a Nation’ (1915, not the 2016 festival darling that reclaimed the title). Not that there’s anything wrong with the former two and the latter is undeniably an important landmark in filmmaking and cinematic history, but 100%? Really? Fortunately 12 Angry Men lived up to the promise.

The film follows the deliberations of a jury made up of the titular men at the conclusion of a 6 day trial. They are to decide the fate of the defendant, a young man on trial for murder, the sentence for which is death. The preliminary vote finds that 11 of the men believe the boy to be guilty with one, Henry Fonda’s juror #8, singled out early on by his white suit, unsatisfied with the evidence.

The remainder of the film plays out with Fonda slowly attempting to win jurors over to his side and largely takes takes place in a single room. The heat plays a major role in making the men live up to the promise of being angry and as #8 wins them over, they shed their dark coats in order to cool off and reveal light shirts beneath. A great visual cue that I only noticed on my second watch.

It’s easy to see why the original teleplay was adapted to be a playplay before finally becoming the screenplay. Wikipedia tells me that only 3 of the 96 minute run time takes place outside of the jury room. I’ve gone one step further – that’s a tiny 3.125% of the film. Maths and films – it’s what I do.

Keeping an audience entertained with one, it must be said, fairly dull location is not an easy task but director, Sidney Lumet, and cinematographer, Boris Kaufman, manage it. Clever use of the shot-reverse-shot technique in the form of one-, two-, three- or even four-shots, the latter two of which I can’t think of another example anywhere, help to keep the framing fresh and inventive.

Actors regularly pace around the set as dynamics within the group change and new conflicts arise. The entire film is carefully choreographed to allow for all of the actors, camera and crew to move around each other, resulting in dynamic shots that would regularly end with a framing of 3 or more characters at various distances from the camera, their size within the frame emphasising their importance at any one time. Framing such shots statically can sometimes be a challenge in and of itself. This is combined with a phenomenally well written script from Reginald Rose with dialogue that drove the plot and developed character with incredible subtlety and finesse.

Excellent performances across the board, helps all of this feel extremely natural – almost improvised. Fonda steals the show but has great support from Lee J. Cobb as his main antagonist, #3, while Ed Begley’s #10’s bigoted ‘us vs. them’ attitude results in one of the film’s most powerful moments.

The film is a masterclass in building tension and claustrophobia. This was the feature debut of Sidney Lumet who, prior to this, had a background in cinematography. As such, he had an understanding of the power of his lenses and the feelings they could help him to convey even within such a cramped workspace. Initially utilising wide angle lenses to create a sense of depth and space between the characters and, as film progresses, the focal lengths of the lenses used increase, reducing the apparent distance between characters and compressing everything behind them. The walls literally close in on everyone.

Towards the end of the film this is done to such an extreme degree that one-shots of the jurors are cut off at both the forehead and the chin – a stylistic decision avoided, as a rule, by most cinematographers. However, breaking well established rules can lead to greater impact and this uncomfortable, cramped framing helps to portray exactly that. In addition, the camera transitions from a more forgiving high-angle at the beginning to a low one at the end for further emphasis.

The use of telephoto lenses for the latter portion of the film, while a practical decision for the previous point, also meant that the depth of field was much lower, blurring the space around the characters as they become less sure of their convictions. Telephoto lenses are well-known for their shallow depth of field which would have had to have been compensated for in order to get the entire face in focus. Combine this with the infinite focus of the more open wides to capture the details on every character’s face and indication is that the shoot was done using lenses with very small apertures. While this technical jargon is uninteresting to most, what it means is that in order to be able to properly expose the images, the cinematographer would have had to have used some fairly extreme lighting on the set. It’s fun to think that all of the actors probably were actually sweating through their clothes from the heat. 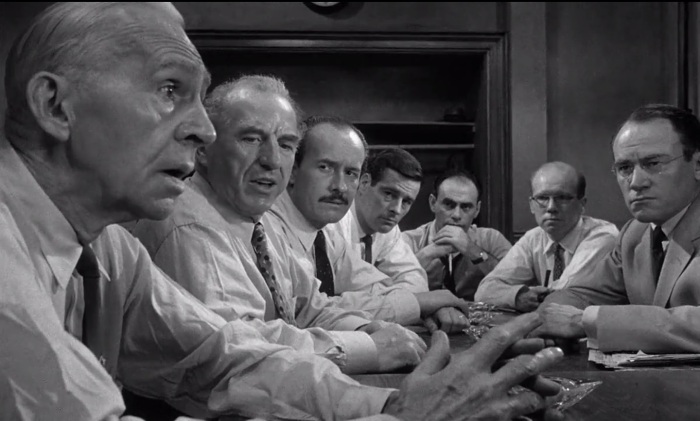 No juror is named until the end of the film and the defendant is always referred to as ‘the boy’. The final shot sees jurors #8 and #9, his first supporter, become the only two to reveal their actual names to each other before parting ways. The wide angle lens is used once more as the stress has been lifted and everyone has room to breath again. A very simple ending, and we are left with undeniable proof that cinema doesn’t need to be big budget or flashy to be a masterpiece.

THIS IS NOT A DEMOCRACY.